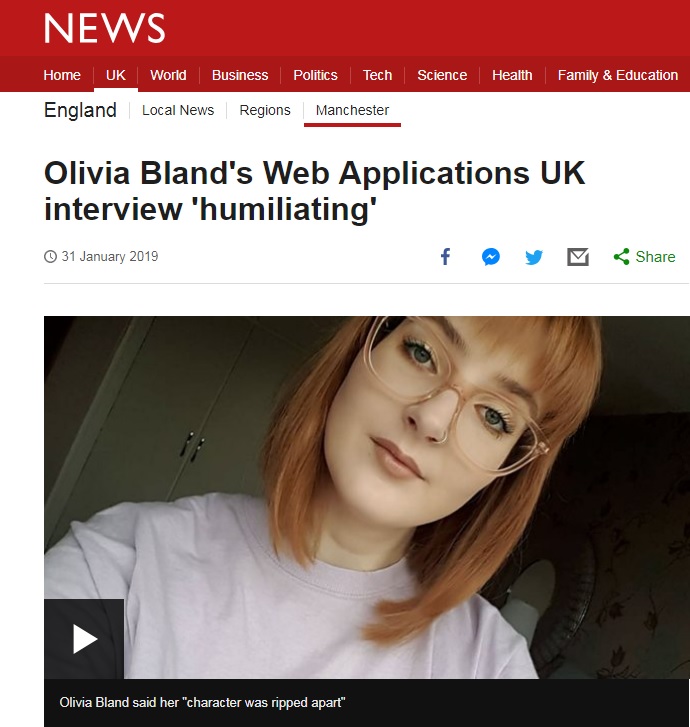 The only slightly surprising thing about this story was that it made the news at all – and that is surprising partly because it’s hardly news that bullying goes on in the workplace (from Philip Green downwards, or perhaps that should be upwards), and partly because those affected rarely go public either through fear of career repercussions, or because they think it will make them appear inadequate. It’s been reassuring to see a mostly positive response to Olivia Bland’s story.

After a career of more than 40 years in the tech industry I know that despite its young, hip and cosy image of pool tables, ping-pong and bean-bags (all true) there is no shortage of bullying behaviour and for many this starts with the interview. While I have certainly been subject to bullying from managers once in a job, I’ve been fortunate and not suffered direct bullying at job interview stage. That’s not to say that I haven’t had my fair share of cocky arrogant people trying to show me how clever they are, but I’ve attended most of those interviews as an experienced professional, and been able to respond appropriately at the time (I can be cocky and arrogant too), and walk away from the job. That’s much more difficult for junior personnel and those desperate for a job.

But I have been a part of organisations where the ritual bullying of interviewees was institutionalised. Techies who spent most of the day wearing earphones, staring at their screens and talking to no-one could be seen stalking around the office with a manic grin rubbing their hands in anticipation of locking a poor victim in a closed meeting room for a couple of hours posing questions designed as much to show how clever they were as to gain any insight on the abilities of the interviewee. It served as a group bonding exercise for the perpetrators, so I guess that helped morale, but I’m sure many good applicants slipped through the net, and the company lost the powerful benefits it could have derived from a more diverse workforce – those who did survive the process tended to be clones of those doing the interview.

For the last three months I've been consistently running five days a week. Now, with less than four weeks until...