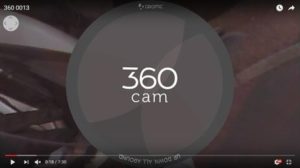 As a part of my company’s real-time video stitching work we have been looking at state of the art 360-degree video cameras. Most of our development work has been based on what has become a de-facto standard for professionals capturing 360-degree content in the field – six GoPros mounted in a cube
formation. This rig can produce great results, but it’s expensive, physically cumbersome and difficult to operate. I recently took advantage of the opportunity to use three very different products, all aimed at the consumer market.

My test was based on a realistic use-case for a keen amateur – capturing 360-degree video from a motorcycle for upload to YouTube.

Using the cameras in a real-life situation reminded me that any camera which requires lengthy processing before its content can be used will remain a niche product used primarily by early adopters. As people discard their PCs and do more and more on mobile devices and tablets, products aimed at the mass consumer market cannot rely on a PC for essential functionality. Of these three cameras, only the Giroptic even begins to meet these “instant gratification” objectives. Its secret weapon is real-time video stitching and reprojection in the camera, meaning the video file it outputs is immediately usable on YouTube (and Facebook).

A lot of product reviews dwell on video quality. At the moment, while there are quality differences in the video generated by each  of these cameras, by the time it’s been processed, uploaded to the Cloud and then delivered back over the internet for viewing, it’s difficult to tell the difference between them – in truth they’re all pretty dire if you look too closely.

Which one would I buy? I answer that at the end of this article – but read on for more detail….

This has a single lens with 235-degree field of view which, with the lens pointing upwards, provides all-round 360-degree coverage. It is possible to use two of these back-to-back for a full spherical view, but I chose to use a single camera, which leaves a big blind spot at the bottom.

This uses dual fish-eye lenses back-to-back to provide genuine full 360-degree spherical coverage. The light from the lenses is reflected through 90 degrees on to the sensors, an arrangement that allows the lenses to be very close together, to minimise parallax problems.

This was originally launched as a Kickstarter campaign in 2014, with first products shipping in 2016. It uses three lenses which deliver a 360-degree view but not a full sphere, since there is a significant blind spot looking down.

All of the cameras passed the test of being easily usable without reading the instructions – simply turn on, select video mode and press the “go” button. All happily connected to my laptop via USB and made their content readily accessible. For the Giroptic that content could be directly uploaded to YouTube, which recognised it as 360-degree content but for the Kodak and the Ricoh there was a further step to produce the equirectangular video required. This re-projection (and for the Ricoh, stitching) was handled by the special Windows app for each of the cameras – and for both of them, on my modest laptop, the process literally took hours for a 10 minute clip.

Physically, the Ricoh and the Kodak are the neatest packages, but inexplicably the tripod mount for the Kodak is not underneath in its big blind spot, but on the side, in full view in the video (there is a special mount for the Kodak, with GoPro-like fixing which would address this problem, but I didn’t have the required parts to use it). In my particular test the Ricoh and the Giroptic both mounted neatly and conveniently, with the attachment visually unobtrusive.

The screenshots below link to the YouTube videos for each camera:

Which one would I buy?

For general use I’d want the physical compactness and aesthetic quality of the Ricoh. On the other hand, if I wanted an action camera for something like mountain biking or skiing, the Kodak would be a better package. But neither of those has the on-board stitching offered by the Giroptic, which is a real plus point. The Giroptic was the one I took on holiday this year.

This article was originally published on the Argon Design website: