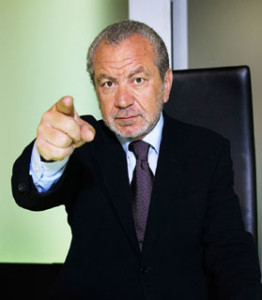 Here in the UK bullying is a hot topic right now. It’s hit politics and press headlines with allegations of a culture of bullying in Conservative Central Office. In this case, sadly, the bullying might have been a factor in the suicide of a young political activist. And whilst this is happening in the nearly real world of politics, we see the latest series of The Apprentice, with Lord Sugar setting a dreadful example to his aspirant apprentices and TV viewers.

Lord Sugar has made (and sometimes lost) a lot of money and is presented as the stereotype of a successful businessman. We are supposed to believe that his style is tough and business-like. But in the show he bullies the contestants, ridiculing them with often arbitrary (and indeed sometimes ridiculously stupid) judgement. He is in the position of overwhelming power and wields that power in an unpleasant and macho alpha-male act. It could never happen in real life, could it?

Well, yes, it could and it does.

“My name is Cliff and I was bullied.”

Let me come out and declare an interest – not so long ago I was the victim of prolonged bullying in the workplace. I might not look like a typical victim of bullying – I’m not young, small, female, shy or insecure. I was doing a job for which I was well qualified, and had a good relationship with my fellow workers. But there was an endemic bullying culture at the very top of the company – a number of the ambitious directors felt the need to enhance their career paths, bigging themselves up by belittling the people working for them. They were intent on getting to the top by climbing on the bodies of their staff.

Bullying was random and arbitrary, mostly by my direct manager, but also by another Board member. I was undermined in meetings with other staff members, and there  was a general lack of respect in interactions.

Despite success in similar jobs for 30 years, I began to wonder if it was me. At the weekend I’d be thinking positively, and looking forward to the coming week – I enjoyed the work and the company. By the end of Monday all those positive feelings had been metaphorically beaten out of me. I was doubting my own abilities – everything I did turned out badly. It became a self-fulfilling prophesy.

My manager was seen as a hero figure by his colleagues on the Board. There was no realistic way of rectifying the situation from within. I was not the only person to be suffering in this way. Eventually the decision was made for me. I was told to stop making arrangements for my next business trip. When I asked why, I was taken to a meeting room and told that I was to be made redundant. My feeling was of overwhelming relief. I was losing a good job and approaching my 60th birthday, but concerns over future income were as nothing compared to the emotional release of leaving.

If you’re in a job where you’re being bullied by management, remember these points:

I had fantastic support from friends and colleagues and took the opportunity to start freelance work, which has allowed a whole bunch of new experiences and the recognition that the problem was not me.

Bullying in any aspect of life is distasteful. In the work environment it’s as bad as it can get. We spend most of our waking life at work, and it pays for our way of life. For many it’s also a source of intellectual satisfaction and a major component of their identity. In companies like the one I was in, Lord Sugar style bullying behaviour by senior managers is admired by their peers and actively supported by HR, and despite the good intentions of employment law, there is no solution except getting out. All things considered, being made redundant was a good outcome – a little compensation for the wholesale disruption of my career by a small number of talented but flawed individuals – all of whom have incidentally since left the company.

Get in touch if you’d like to talk discuss how my skills and experience could benefit your company.