I had two interesting evening engagements last week – although they arguably had a common link, they provided two very different approaches to looking at the future.

I was present at this event in the glorious Møller Centre to support Blendology’s connectivity product in a trial with Cambridge Wireless. The attendees were indeed prestigious, and who could be more prestigious as a presenter for this inaugural lecture than Herman Hauser. In his talk entitled “What next in Communication?” he started by telling us his secret for foretelling the future.  He has spent years looking for the pattern, and at last he has found it.  It’s totally random.  So now we know.

We were guided through history, with a reminder that (for some of us) communication at 110 baud was not that long ago.  Let me drop in a few keywords and history will provide the final judgement: 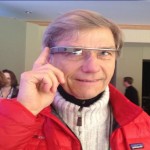 One interesting point he made was that machines have displays and we don’t – I’m not sure I’d totally agree.  Another important message I took away was that in any control system the response time of the control loop must be considerably better than that of the entity it’s controlling – this is an important one for economists to ponder.

It’s the first time I’ve heard professionals (except perhaps the emergency services) advising potential customers to avoid their services, but this was the message from Simon Cook, Alex van Someren and Laurence Garrett, in a session chaired by Alex McCracken of Silicon Valley Bank. It was refreshing to hear such honesty about what we all really know – these guys are in it to make money. If you go to them, you will pay with a large part of your business.  If you can find any other way of funding your activities, then do it. Customers were highlighted as the most important source of funding. Another source mentioned was crowd funding – good for market testing of an idea.

The point was made, as it is so often, that Cambridge is good at ideas, but not so good at commercialisation.

My takeaway was a reminder that we all find it difficult to give up an idea. The opportunity cost in life is high – know when to give up. That’s a good one to bear in mind.